Grim Reaper Fitness was well represented today at Tri Harder promotions inaugural roll out of the Stovepipe and Railsplitter in the month of June.  Previously the race has been held in August and to escape the heat and the June black hole after Tri-Shark, the race changed dates.

Well guess what?  It sure wasn’t hot!  The rain and wind however reminded us all that mother nature is not a triathlete and often likes to make our feats of endurance that much harder.  It was humid, warm, with a driving rain (that actually hurt), with 15mph winds on the bike.  Did that stop the athletes of Grim Reaper Fitness, nah we race no matter the conditions!

In the shorter of the two races GRF saw the following finishes:

Jori Cooper won the Athena category (awesome and a GRF super fan with fellow racer on the day Jen Weaver)  *Reaper happens to be a fan of them too!

In the Olympic Distance Race

Coach Jason Sturdyvin (gets punched in the face during the swim resulting in a bloody nose, and looses his rear brakes during the bike causing multiple issues, and still) 1st in the 30-34 AG and 29th overall 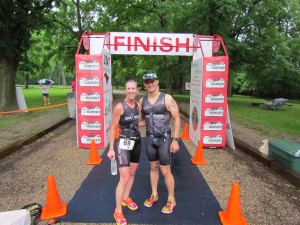