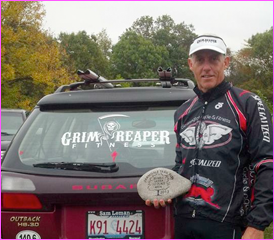 This race was originally run at Farmdale Recreation area, but had to move the race venue due to the Government situation. The race directors and CITRA Central Illinois Trail Runners Alliance volunteers did a great job with such short notice moving the race the Jubilee Park. This was to be my redemption race after breaking my foot in last year’s Farmdale race at mile 4. First DNF ever.

Going into this race with mental images and that sudden feeling of nausea played heavy on my mind. This year my training has been a bit different and I have logged a few more hours in the woods so I would be used to the trails.

My strategy for this race was to go out conservative with whoever was up front. This was the first time on this trail system so I needed to get the lay of the land. They said before the race that the course had a few good climbs and fast descents, but this is Illinois, right? As we stepped up to the line I looked around and saw a few familiar faces.

The horn sounded and we were off for 4 loops of 7 plus miles. As we entered into the woods I was in second and this thought crossed my mind, “I was in second place last year when I broke my foot”. That was a short lived thought because I had a something to prove. The first couple miles had a few climbs and a flat section I really liked. I could really push the pace when and if I needed too. The rest of the course was technical with ruts and roots, and there was a few creek crossings and some of the bridges had broken or missing planks that you really had to be careful on.

As we approached the end of the 1st loop the male leading fell off pace so I took the lead coming in.

I grabbed a power gel and new water bottle and was back out on the course. This was the first time that I have raced wearing a nutrition belt. I did train with it though, so it was nothing brand new. At mile 2 of the first loop I tripped, did a dive roll and broke my water bottle. (My ninja training when I was younger is now paying off) I was also carrying OSMO hydration and a special blend of liquid calories. As I entered the woods I looked back and no one was following. Once I hit the flat section I chanced it, and dropped the hammer. I was hoping this effort to gain ground wouldn’t slow me down on the next 2 loops. This loop was fun. I was catching people and passing them, but was slowed by some runners who were wearing ear buds and couldn’t hear coming up from behind. For the most part everyone was encouraging, and I fed of the energy when I would hear “Go after it” or “Go get it” or “Nice job”.

Back at the drop bag tent I replenished all fluids and gels and went out for a 3rd loop. You have to love ultra-marathon volunteers and spectators. Even though I didn’t spend much time there I heard lots of cheers and gathered up some positive energy.

Running back into the woods I was going to just maintain what lead I had. In this 3rd loop I was again slowed by groups of runners on the single track. Once I hit the flat section again I opened up the pace and was able to stretch the legs and maintain a consistent heart rate. This loop proved to be the most mentally tough 7 plus miles of the race. I just kept telling myself that if someone catches me now they deserve the big engraved “ROCK”.

The only thing I needed back at the tent was 1 Powergel and then I sprinted off for my final and slowest loop. I ran alone for the most part on this loop passing only a few of the other runners. It is definitely a different feeling being in the lead and possibly being chased down toward the end. I found myself relaxing a few times, and had to tell myself that it was still a race. I maintained a decent pace and stayed up with my nutrition to start the recovery process. My non race strategy paid off in the end.

To sum up my first 50K win, I had to work hard, but I had a blast. This was a great race and I stayed around for several hours after to cheer on some of the Grim Reaper Fitness friends and the Shady Hollow Trail Runners that were racing. Great job to all who participated in this race.

“True Victory Is Victory Over Oneself”