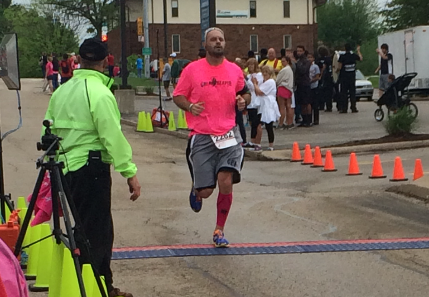 PEORIA – Jason Hebel achieved a significant personal goal in setting a PR at the Susan G. Komen Race for the Cure 5K, a race he ran for his mother, Saturday.

Billie Lee Hebel was diagnosed with breast cancer in January 2013. After a year of chemotherapy and radiation, she remains cancer free. The Susan G. Komen race series raises funds and awareness for the fight against breast cancer.

“The reason I ran this race is for the first time in the 11 years I’ve been racing, my mom asked me to do a race,” Jason said. “it was also the first time anyone had come just to watch me race.”

After running a 6:45 first mile – well over his normal race pace – Hebel settled down and finished with a 21:47, besting his previous 5K time by a whopping 1 minute, 16 seconds.

“I was literally crying that whole first mile…I wanted to do so well for my mom,” he said.

His performance was also good for 4th in the men’s 35-39 Age Group.

“If it hadn’t been for the support I had to calm me down, I wouldn’t have been able to crush that PR,” he said.

“Grim Reaper has such a great team and coaching staff,” he said. “I can’t imagine being able to race the way I have the last couple years without this team. So Saturday was for all of them, too.”

EFFINGHAM – Grim Reaper’s Kris Hohulin broke into the women’s top 5, while Buck  Manley, competing in his 2nd triathlon, placed 4th in his Age Group at the Cutting Edge May Madness Sprint Triathlon Saturday.