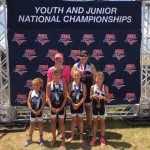 WEST CHESTER, Ohio – Grim Reaper Fitness’ first youth & junior team traveled to USAT Nationals and brought home a top-10 and two top-20 finishes. Lily Matthews finished 9th in the 15-year-old female division posting an overall time of 41:44.9. Her swim time of 3:53.41 was the division’s fastest. Athletes between the ages of 11 and 15 raced a … END_OF_DOCUMENT_TOKEN_TO_BE_REPLACED 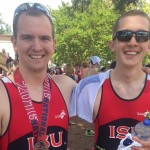 CLEMSON, SC – The Illinois State University Tri-Birds competed against nearly 1300 athletes in the USA Triathlon Collegiate Club National Championships Saturday. Michael Braun posted the best finish among the Tri-Birds, finishing the Olympic distance event in 2:27:23, which was good for 260th among over 750 men. Run times were higher than … END_OF_DOCUMENT_TOKEN_TO_BE_REPLACED

Fresh off its second straight USA Triathlon (USAT) Mideast Region championship, Grim Reaper Fitness is taking on a new challenge – the formation of a Youth and Junior Triathlon team. Coaches Erik Rankin and Tim Auth are certified USAT Youth and Junior coaches, who bring that education along with the past experience of coaching … END_OF_DOCUMENT_TOKEN_TO_BE_REPLACED