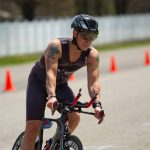 Erik Rankin is the founder of Grim Reaper Fitness and part owner. he is a Certified Triathlon Coach with USAT (Level 1 & Youth and Junior) and ITCA certifications.He has completed sport-specific coaching designations in USATF, RRCA, and USAC (Level 3). In 2014 he became an official TrainingPeaks Certified Coach and is currently working to complete his ASCA swimming certification.

Erik takes education seriously, having earned two masters’ degrees and working to complete his Ph.D. in Higher Education. He is currently working with top triathlon coach, Ian Murray, making progress toward Level II USAT certification. A happily married father of two little girls (both of whom are crazy about multisport), family is of the greatest importance to Erik, and he is thrilled that GRF is part of that family.

Erik is excited for 2017 and looks forward to watching his clients excel. Grim Reaper Fitness has coached athletes to complete all of their multisport goals since 2010. No matter how big or small, Erik can build a plan to suit your needs.