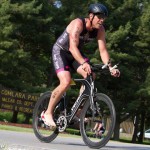 Tim Auth signed up, along with a family member, for the first ever Grim Reaper triathlon program in early 2012 with one thought: “Hey, it would be cool to try a triathlon.” He had no notion there would be a second, let alone the eight short-course tris he would run by summer’s end.

More surprises … in 2013 Tim completed a Half Ironman and a half marathon, and now has the opportunity to coach new triathletes.

He has been active for many years from basketball & strength training to running & cycling, but as an adult he’d bounced from one method to another and he wasn’t competing. Grim Reaper Fitness and endurance competitions have brought purpose and community to his fitness regimen.

Likewise, in the past Tim coached children from kindergarten to junior high in multiple sports and taught college students and adults, but its had always been a year or two here, a year there. As it did for his personal fitness regimen, Grim Reaper Fitness brings a focus and purpose to his enjoyment of teaching and coaching.